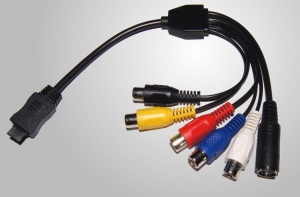 The Pandora has an official TV-out cable that can be ordered from DragonBox. The cable works with PAL and NTSC, and has a length of 20cm. The connection plugs are all female, so a separate cable (either RCA or S-video) of any desired length should be used to connect it to the TV.

Although mostly used to duplicate what is on the Pandora's screen, the TV-out is a full secondary graphics output, and is capable of running independently from anything on the LCD.[1] For example, DraStic (the Nintendo DS emulator) supports showing one screen on the Pandora LCD and the second one on the TV - which gives one a similar gameplay to the Wii-U.

The blue and black plugs can be used to record audio to the Pandora from an external source (such as from a microphone).