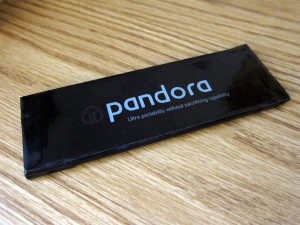 Without switching the device entirely off, it may be placed into low power mode or regular power mode; simply pressing the power button will toggle modes. Note that as of hotfix3, opening the lid in low power mode has no effect.

This is the normal operating mode, display on, WiFi and Bluetooth on if requested. CPU speed can be selected by the user, and has a small impact on battery life. Screen brightness will also have a significant effect on battery life. The CPU should automatically self-regulate to the current task, and 10-20 hours battery life is possible depending on usage. This is mostly independent of the set CPU speed for any given task. At any time, the battery gauge will show the remaining battery life if the usage remains the same as over the past some seconds. See [1] for a detailed breakdown of power consumption.

The only change with the lid closed is to turn off the LCD backlight and the display itself. This improves battery life, allowing music playback and streaming to continue. As of Hotfix2, the screen remains on if the device is powered up with the lid closed. It is also possible to set xfce to blank the screen after a period of inactivity, which helps with battery.

Low power mode is toggled by a short press of the power switch to the right. The screen is off, the radios are disabled, the CPU max speed is set to 14 MHz. The device is still silently on, allowing for alarms to go off or it to be turned on again instantly. The power LED will be dimmed, and may appear to be off if you are outside.

Low power mode is probably going to be used as the normal "off" for most people, with true off (device powered down entirely, unable to respond to alarms or wake up quickly) available to conserve battery power. Turning the Pandora off completely is the best option if you don't plan on using it for few days or longer.

Since the Pandora has to be powered whilst it is charging, low power mode is best for fastest charging, and will even allow a full charge to be achieved from USB. It is also the best way to use the Pandora as a USB charger for other devices.

Opening the screen whilst in low power mode has no effect (screen stays off, clocks stay low), and you will need to use the power switch to resume.

At the moment, there is no clear advantage in slowing the clocks (other than being an effective pause button when playing MP3). The only saving is through disabling the radios. This is likely to be improved in due course since there are features in the omap processor for power saving which are being added to the linux kernel.

Select Logout then Shutdown from the window manager to power off. If a charger is connected, the device will re-boot immediately. It is possible to get into a state where you believe it is powered off, but in fact it is using power at the normal screen off rate - so after 12 hours, 50% of your battery is gone. The Power green LED ought to be a tell-tale. It is possible that some bugs exist in this area, but nothing has been clearly identified[2]

A common problem seems to be that if you switch off before unplugging, your Pandora will re-boot even though it is now left unplugged. This problem is compounded by the low battery shutdown script being called repeatedly (and actually preventing shutdown).

To do a hard-reset of the Pandora (in case of software crashes), press and hold the Pandora key and flick the power button to the right.

To do a hard-shutdown of the Pandora, press and hold the Pandora key with right shoulder button held and flick the power button to the right, and then select shutdown from the menu.[3]

The events which control power can be customised [4]. Lid switch, Power Switch, battery threshold and Window Manager shutdown commands. Note that the battery manager in xfce will also take action when the battery is low, by default forcing a shutdown at 5% (so you may observe a full boot process, the window manager appears, then immediately shuts down)

It is possible to charge from the mains charger (use the supplied one or a GENUINE PSP adaptor only) or USB cable. While a charger is connected, remaining battery level is displayed, but the time displays 00:00. If charging from USB, it is possible that the battery will still discharge slowly, since the Pandora takes more current (in normal mode) than the USB can supply. Mains charge is configured to draw 2000mA, USB charge is more like 500mA.

It is not possible to charge the Pandora without turning it on - connecting the mains charger or the USB cable will turn it on automatically. The normal charging circuits rely on the CPU for configuration. In practice, this has minimal impact on usage, except that after charging, you might wish to explicitly turn off (and maybe there is a easy way to automate this by adding a charger event to call a script).

Full discharge charging: The pandora will shutdown in case of low battery power. However there is a protection circuit in the battery itself which will cut off the power output of the battery. The battery and the pandora seems to be dead in this condition, but it's not. If you plug in the power you'll see nothing happen - but the battery will be recharged very slowly until the battery is above it's cutoff level. This could take up to 30 minutes. Then the pandora will startup and the normal CPU controlled faster charging will continue. [5]

If your Pandora's battery is at less than 1% (actually configurable in XFCE), then you may have problems in using USB to charge the Pandora. Currently, USB is not recognised by the XFCE battery monitor so it will shutdown with no warning. As a workaround, you can put your Pandora into low power mode as soon as the flashing mouse icon (XFE startup) appears. This should significantly delay loading the battery monitor widget, and even if the charge hasn't passed 1% by the time it checks, on the next try you should be there.

The OPP is a TI term which reflects the fact that low clock speeds can be achieved with lower supply voltage than the higher clock speeds. Increasing OPP will reduce the lifetime of the device significantly (from 10 years to 5 years of continuous use.) OPP3 is the default as shipped by OpenPandora. As of Hotfix4, it is possible to set a maximum OPP in the range 1-5 (for example, to 5):

This will then increase OPP to suit the requested CPU max, as pre-determined by a table built in to the kernel. These thresholds use OPP1 for below 125 MHz, and OPP5 for above 720 MHz. It is possible to set the limiter and maybe run at 500 MHz in OPP2 (depending on your specific chip). See this forum thread for actual results.

Tweaking scripts to make this tuning easier are in the works.

The kernel provides some information about battery state through the filesystem. See Data_provided_by_Battery_and_Power_driver. This may help with diagnosing problems.