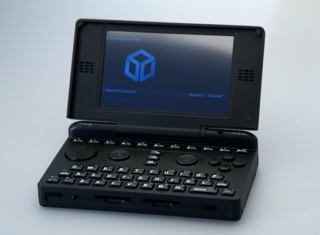 It is the spiritual successor to other handheld consoles such as the GP32 and GP2X. There is currently no other device that has dedicated gaming controls, two analog nubs and a QWERTY keyboard.

It was developed as a gaming device not just to run games made just for it but also to emulate older systems. From home consoles like the Atari 2600, NES, SNES, Sega Master System, Sega Genesis and Neo Geo to handheld consoles like the Game Gear, Game Boy/Color/Advance to traditional arcade cabinet games. It can also emulate entire computer systems, from the Commodore 64 and Amiga to old Apple Macintosh computers or a PC with DOS.

The Pandora can do all of this because it is a tiny computer running a custom distribution of Linux based on The Ångström Distribution. Because it runs Linux, the Pandora isn't just a console but a complete desktop computer with access to tens of thousands of Linux programs.

From classic gaming, listening to music, watching movies, viewing pictures, program development or surfing the web to just reading or writing texts, the Pandora has a lot to offer.

Our FAQ has more detailed information.