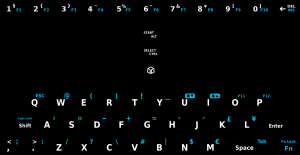 In the months before the first preorders were taken, there was much discussion and community voting about the best layout. This was one of the final votes. The final layout was different from either one of the two most popular community proposals, but incorporated some of the suggestions such as having a "Pandora" button.

The matrix layour is detailed on p.20 of the Hardware hacker's guide (here). A more readable version appears below.