Difference between revisions of "EXT Connector" 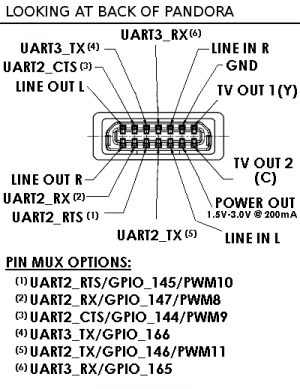 What does it have?

Note that Power Out defaults to 2.8V, while the digital I/O lines work with 1.8V logic. To avoid damaging the Pandora, a level shifter will be required for most applications using these signals.

How Do I Make a TV-Out Cable?

By default the UART2 pins are set up as GPIOs, and UART3 is set up as an UART. The following describes how to change pin functions under a 3.2 kernel.

Example of changing UART2_RTS from GPIO to UART mode [7]:

Warning: at the time of this writing, both bootloaders (xload and u-boot) set this to 2.8V unconditionally, so don't rely on this providing other voltages during reboot until you patch both bootloaders. The digital I/O pins use 1.8V logic and must not be connected to the 2.8V from the power pin!

The pins must be set as GPIO using the pin mux.

In the following commands, NNN is the GPIO number, e.g. 145.

Controlling the GPIOs with shell script like this is very slow; if speed is required, choose another language to write to the files more efficiently.

These UARTs support a wide range of baud rates. UART2 has the RTS and CTS pins brought out to the EXT connector, while UART3 does not.

PySerial works for configuring and using the ports.

On older firmwares, kernel messages are directed there. SuperZaxxon or later have that disabled.

On all firmwares released so far terminal with a shell is attached to UART3. The port runs at 115200 8N1 baud rate.

To disable kernel mesages, you need to edit kernel boot arguments. Probably easiest way to do it is to create autoboot.txt and place on root directory of a card in slot1 with this content:

Alternatives are using u-boot environment (configure through USB or UART3 serial before system boots up) or patching and reflashing u-boot itself.

For this you need to edit /etc/inittab on pandora rootfs and comment out these lines:

The UART2 pins on the OMAP could be configured for PWM, but there does not seem to be an interface in the Pandora's OS to do this.

A wide variety of PWM output can be improvised with a UART. The start bit is always low and the stop bit(s) are always high, but the other bits depend on the character sent and the parity selection. The number of bits per character can be changed between 7 and 12, giving several options for frequency division within each available baud rate.