From Pandora Wiki
(Redirected from How to back up a Root File System (on an SD Card) to an SD Card)
Jump to: navigation, search 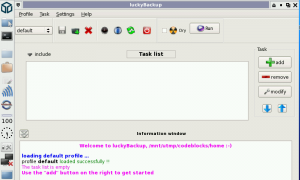 Graphical tools
LuckyBackup MarkW
or, if you just want to backup your gamesaves.
BGS made by eki

Command line guide to making an image from working rootfs

Comes in handy prior to doing something risky, or just if you want a snapshot of your working environment. The result is a tarball much like the one found at [1], but containing all of the user's libraries/apps/configuration etc.

Note that this isn't necessarily the best way to do it, but it is confirmed to work. Essentially all we're doing is storing the files of the rootfs in an archive using tar.

1) Boot up into an OS that isn't using the file system you want to back up (the default OS on the NAND works well for this).

2) Open up SD Card A in thunar, right click and select 'Open Terminal Here'. Be sure to be at the root of this filesystem you want to backup, seeing /bin, /dev, /home, /media, etc.

3) In the terminal type:

For those that don't know what this is doing:

That's it! The pandora will happily chip away at the file system for the next 45 minutes or so (I didn't stick around, but it was finished when I came back an hour late). To extract it the command is:

For example, to extract my previous example into an SD Card with label 'devos':

You can now go crazy with your opkg, safe in the knowledge a working copy is waiting for you when you inevitably type upgrade instead of update. Sigh.